It would be an interesting choice to gain insights into how Topography and Deformation Measurement (TDM) equipment by Insidix played a crucial role in understanding the temperature loads during fan-out wafer-level packaging (FO-WLP) for realizing the processes of Overmolding, Post-Mold-Cure, Carrier Release, and RDL Curing. TDM supported the study performed by Marius van Dijk, Saskia Huber, Andreas Stegmaier, Hans Walter, Olaf Wittler, and Martin Schneider-Ramelo of the Fraunhofer Institute and the Research Centre of Microperipheric Technologies in Berlin, on FO-WLP Warpage Behavior-Influence of Process Temperature and Geometry. https://ieeexplore.ieee.org/document/9410875

Now, you must be wondering what FO-WLP is. Well, Fan-Out Wafer Level Packaging (FO-WLP) refers to a technology in microelectronic packaging that facilitates miniaturization, cost reduction, and shorter time-to-market. But warpage effects in FO-WLP is a critical issue that largely impacts the manufacturing of cost-effective and reliable SiPs. So, to deduce countermeasures for warpage effects related to temperature loads, TDM was used to produce related thermal profiles. And for doing so, extensive thermomechanical material characterization, temperature-dependent warpage measurements, and numerical simulations were performed.

Warpage measurements refer to the shape deformation at different temperatures due to the use of materials with other thermal properties (CTE mismatch). Now, to prevent mixing up different effects in the process, Silicon was chosen as the carrier material, and no thermal release tape was used. This simplified set-up of a real FO-WLP facilitates a detailed study of the EMC material and the interaction between EMC and Silicon.

The warpage is identified under thermal load with the Insidix TDM projection Moiré system. The temperature of the demonstrator is checked in four different positions on both the top and bottom sides. 3 heat cycles were carried out for each demonstrator.

From the results obtained in TDM, a direct impact of the EMC thickness on the warpage was noticed. The warpage seemed to increase after heating up to 200℃ for all EMC thicknesses. Besides, this effect analysis done using TDM was further validated by the simulation model proposed in this study. Also, warpage measurements indicated that non-symmetrical deformation would seem to have a preferential direction.

In this phase, dynamic mechanical analysis (DMA) was performed to determine the stiffness of the EMC material with respect to the temperature. An assumption was made that the EMC material is rheological simple, making it easier to calculate its short- and long-term behavior by implementing the superposition principle. The results make it clear that the thermomechanical behavior of the EMC is not purely linear elastic.

To determine the coefficient of thermal expansion (CTE), a process-like thermal profile was produced by Insidix’s TDM for effective thermomechanical analysis. This process-TMA helps determine precise CTE values before and after each process temperature. It also offers insightful knowledge into the changes in length caused due to probable shrinkage effects. In this study, the CTE values for numerical simulations were determined during the first time heating up to 200°C along with cooling down after this temperature load.

The demonstrator geometry and its results deduced from Insidix’s TDM for warpage measurement were realized in this simulation model. Here, different simulations were conducted to study the influence of Silicon’s orientation in warpage formations and non-symmetrical deformations.

Simulations were also performed to check the stability of the warpage axis. And the results obtained from the simulation model were compared with those measured in the experiment conducted using TDM. In most cases, both the results seemed to correlate well.

Also, shrinkage effects were studied and compared via this simulation model. Shrinkage effects became visible during heating up between 150-200°C, which was comparable to the results obtained during the experiment of material characterization. Furthermore, hysteresis measured in the experiment was also transparently visible in the simulation results. Thus, it proves correct procedures and tools were followed in the experiment. Hence, it marks the efficiency of Topography and Deformation Measurement (TDM) equipment by Insidix for related research purposes.

This study primarily upholds the impact of the process temperature on FO-WLP warpage behavior. It was executed by undergoing material characterization, experimental warpage measurements, and numerical simulations with the help of practical tools like Insidix’s TDM. It was observed that the warpage and shrinkage measurements obtained from experimental results correlate pretty well to the simulation results.

So, this agreement between the experiment and simulation evidences the utmost efficiency and high-end performance of Insidix’s TDM. Furthermore, it highlights the significant role of the Topography and Deformation Measurement (TDM) equipment in comprehending temperature loads in the FO-WLP processes of Overmolding, Carrier Release, Post-Mold-Cure, and RDL Curing. 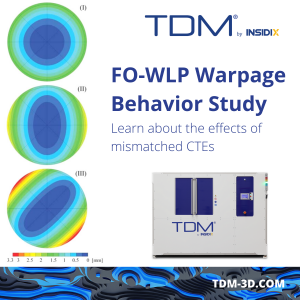